Canonical U1 is an Ubuntu Phone OS Device

Joe Hooper sent us an email of his design, an Ubuntu phone with interesting specifications. As you probably know already, just days ago Canonical announced Ubuntu in a mobile OS flavour, that’s coming soon. They used the Galaxy Nexus to test it and the owners of that phone may receive an image of the OS soon. Meanwhile, let’s see how an Ubuntu phone could look like. 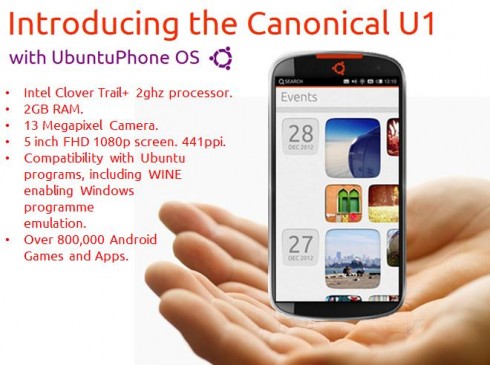 The designer claims this model has an Intel Clover Trail+ 2 GHz processor, 2 GB of RAM and a 13 megapixel camera. I consider these specs a bit overkill, since Ubuntu is more about community, open source and other stuff, not necessarily specs. This year we’ll have two operating systems making life interesting: Ubuntu Phone OS and Firefox OS, both with potential to reach lower end, but still powerful devices. Back to the concept here, it also has a 5 inch Full HD screen and it’s compatible with Ubuntu programs, including WINE.

This means you have access to Windows program emulation, so you can play with Win apps on it. Although I’ve heard Android apps won’t run on Ubuntu mobile, apparently in this case they do… Who would buy a Linux Ubuntu phone? Would you?