Rishi Ramesh created a Google Nexus 6 image for the site nexus6us.com and you can check it out below. The Nexus 5 has barely been launched, so it’s too early to think about the 2014 flagship Google phone, or is it? 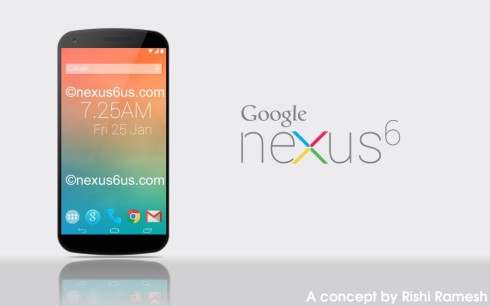 The plastic body of all the Nexuses will be swapped for aluminum and at the front we’ll get Gorilla Glass. But then there’s that theory saying that Samsung will take over the project and make a huge 6 inch device with a Full HD AMOLED+ edge to edge screen, an Exynos 5 Octa CPU and 16 MP back camera, as well as 128 GB of storage. Which one sounds better?

About Kelvin
Passionate about design, especially smartphones, gadgets and tablets. Blogging on this site since 2008 and discovering prototypes and trends before bigshot companies sometimes
HTC Dream 8 inch Tablet May Push HTC Into the Future   Apple iWatch C Render is a Curved Display Wonder With Affordable Price