After creating the ZTE Evoke, designer Nick Ludgate comes up with the ZTE Evoke X, a phablet with an aluminum unibody construction. The device reminds me a bit of a HTC One and it integrates DUOSound speakers. 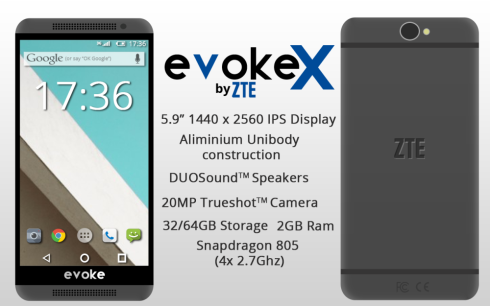 ZTE Evoke X packs a 5.9 inch display with a 2560 x 1440 pixel resolution and an IPS panel. It comes with a 20 megapixel TrueShot camera, 32 or 64 GB of storage, 2 GB of RAM and a Snapdragon 805 quad core 2.7 GHz chipset. The speakers are both integrated at the front and the device’s Android buttons are virtual ones, not capacitive ones. Even the two stripes at the back of the HTC One are replicated.

Nick Ludgate even claims that this concept handset has a price tag, around $249 for 32 GB of storage. Considering the specs and diagonal size, I see this ZTE phone as both an alternative and a rival for the Nexus 6.

About Kelvin
Passionate about design, especially smartphones, gadgets and tablets. Blogging on this site since 2008 and discovering prototypes and trends before bigshot companies sometimes
HTC Slim Concept is Back, Looking Even Hotter   Fake Samsung Galaxy S6 Prototype Stirs Up the Web…