The teaser you saw here is finally cleared and turns into the following concept Ubuntu phone created by Liam Quinn. The handset is called Xenon and it comes with a 3D display, 3D cameras and obviously Ubuntu Touch as the operating system. 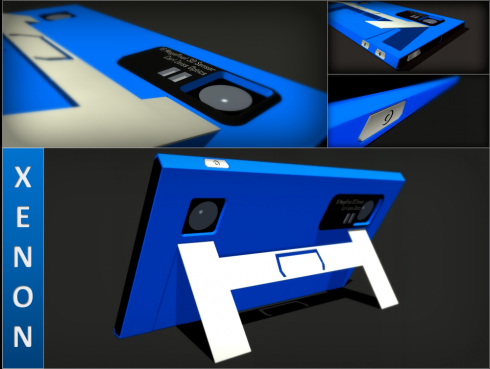 We get a model that adopts a design that involves a lot of straight angles, a dual camera at the back, a camera button and a sort of kickstand at the back. The Xenon has a wireless charging dock, that magnetically orients the phone. It adopts the same design language and can be swapped for a different color. Ubuntu mobile OS uses all four cores of the processor on board of the device and its UI has real 3D depth, thanks to special effects and transitions.

The Xenon concept phone has interchangeable back plates of various colors and if you want to talk specs, know that it features a 5.2 inch 3D display, dual 16 megapixel 3D cameras with Carl Zeiss optics and 3D capability. There’s also dual LED flood flash and inside we can find the Tegra 4 processor and 3 GB of RAM. This model also supports 4G LTE.