Imagined by Adam Safranek, a new designer on our website, the Google Nexus Now concept phone may be the last Nexus handset. As you know, Google is phasing out Nexuses in favor of a new series called Silver. Anyway, this model also runs a revolutionary new Android. 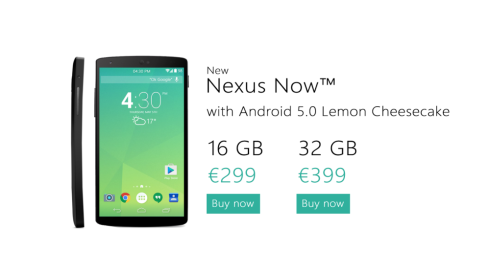 It sports a funky codename that I haven’t heard thrown around till now: Android 5.0 Lemon Cheesecake. The handset is curved and it adopts a very minimalistic UI and very slim screen edges. The virtual buttons are still here and I’m guessing the Nexus Now is centered around the Google Now experience, if I can speculate a bit. Adam Safranek also included prices for this new Nexus phone render: 299 euros for the 16 GB model and 399 euros for the 32 GB one.

There’s not much to say about the body of the new smartphone, since it seems like the usual soft touch material slab and there’s no trace of metal on this contraption. This flavour of Android feels a bit too flat, maybe too close to iOS and to becoming a crayon drawing of a small child. That’s what I call the lack of finishing and reflection of icons, but that’s just me. The design is still pretty good.