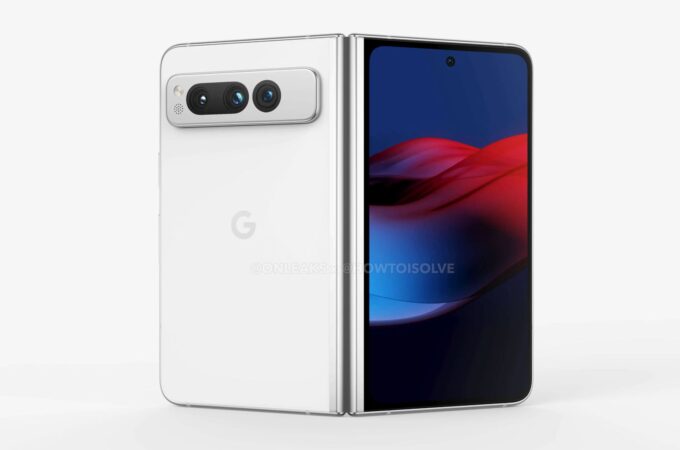 Google has been teasing and leaking its first foldable phone for a while now, but without too many details about the design. Last week we scored a set of renders for the Google Pixel Fold, also known as the Google Pixel Note for a while. They come to light courtesy of @OnLeaks.

At first glance, it seems closer to the OPPO Find, rather than the Samsung Galaxy Z Fold 4. Pixel Fold is expected to drop in May 2023, around the time of the Google I/O 2023 event. The design language channels the Pixel 7, particularly if you look at the back camera. It has 3 cameras at the back, which may well be the ones from the Pixel 7 Pro. The dimensions are said to be similar to the OPPO Find N.

We’re talking about 158.7 x 139.7 x 5.7 mm and the waistline becomes 8.3 mm with the camera bump. @OnLeaks believes in a rather large diagonal, of 7.69 inches. The screen bezels are clearly larger, particularly the top one of the foldable screen, beefy enough to host a selfie camera. The external screen is rather small, at 5.79 inches and it hosts a centered punch hole selfie camera.

Pixel Fold will be powered by a Tensor G2 processor, with 12 GB of RAM and there will be a series of storage options, plus Android 13 out of the box. Expect it available in silver or black and apparently the starting price of $1799 is the same as the Galaxy Z Fold 4. There’s even talk of stylus support.

About Kelvin
Passionate about design, especially smartphones, gadgets and tablets. Blogging on this site since 2008 and discovering prototypes and trends before bigshot companies sometimes
Best Mobile Casino Games To Play With Your Phone   Ways to Avoid Installing Sketchy Apps