With all the BUILD 2014 and Android Lollipop rumors, we have almost forgotten that there’s supposed to be a Nexus 8 this year, according to speculation. Today we received a brand new concept of the device, sent to us by Miguel Cruz. 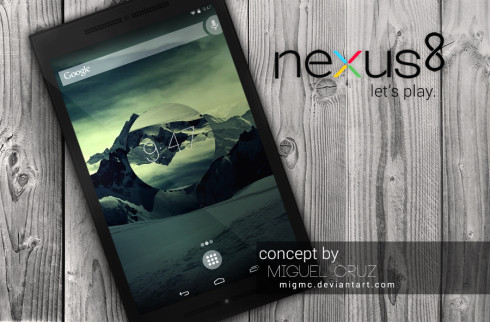 He imagined a high powered device, with a very good display and an interesting flavour of Android. So, we’re dealing with a 8.2 inch tablet with a 2K 3D display and 32/64 GB storage. There’s a higher end unit with 128 GB of storage and a 4K display. Gorilla Glass 4 is also among the specs, together with 4 Altec Lansing front speakers, a 3.2 GHz octa core Qualcomm Snapdragon 900 CPU and 3 GB of RAM.

The 128 GB version once again gets more, 5 GB of RAM. We’ve got an 8 megapixel front camera, a 15 megapixel back camera that can record 4K video and Android 4.7 as the OS. There’s a 6100 mAh battery inside the slate and the interesting bit about the design is that the device is thicker on the left and thinner on the right.

This means that from the lower profile this model looks a bit like a triangle of sorts. The purpose of the thicker area is to use its weight like a stand. What do you think?