We like Bob Freking’s concept phones, because most times they also brings videos associated to pictures. Bob did the most interesting thing ever: instead of imagining the Nexus 5 or Nexus 6, he just rethought the Nexus 4 and gave it a HTC One treatment. 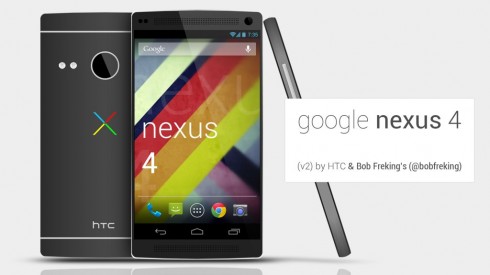 The device obviously runs stock Android, it’s supper thin, it has a 5 ultrapixel camera and it’s made by HTC. “Amazing speakers” are promised, as well as dual LED flash, so I expect the HTC One camera to be surpassed here, as well as the BoomSound speakers. The designer even mentions a price: $299, for the unlocked 32 GB version.

It seems to me that this model is slightly wider than the HTC One and its profile looks a bit different, maybe with a different integration of the metal plate and metal sides. The polycarbonate lines at the bottom and bottom are here and the camera lens seems even bigger this time. The Android buttons are virtual instead of physical and there’s 3 of them, not the two capacitive ones of the HTC One.

Is there room on the market for this Nexus 4 2?

About Thrystan
Windows Phone 9 Basic Ideas Concept   What the Samsung Galaxy S IV Could Have Been: Here’s a New Concept!