After the Nexus 6 was leaked, why not have a look at another device that may debut at Google I/O 2014? That’s the HTC Nexus 8 tablet, that’s rendered below. It was published by UnlockUnit on Google+ and probably rendered by them too… 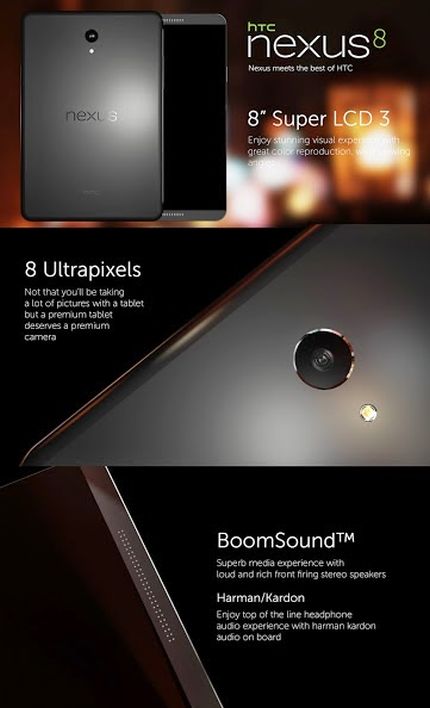 The device is an 8 inch tablet with a Super LCD 3 panel and an 8 ultrapixel camera, that’s a bit too powerful for a camera. It’s actually more powerful than the one of the current HTC flagship, the M8, so the camera won’t happen. This Nexus 8 concept comes with both BoomSound tech and Harman/Kardon speakers, now that Beats is out of the picture. Actually, HTC did release a special Harman/Kardon edition of the HTC One M8, so this makes sense.

HTC Nexus 8 looks like a wide slab of meta, that draws its inspiration from a merger of HTC One M8 and the iPad Mini. Let me tell you exactly what this tablet needs to succeed: high resolution but lower battery usage, a very good battery, a 64 bit powerful CPU, enough RAM and 32 GB and microSD, if possible.