Well well, what do we have here? A presumed Nexus 6 has been spotted on the official Android Twitter account promoting the OK Google concept. Of course, it may just be a mere placeholder or… the next gen Nexus phone. 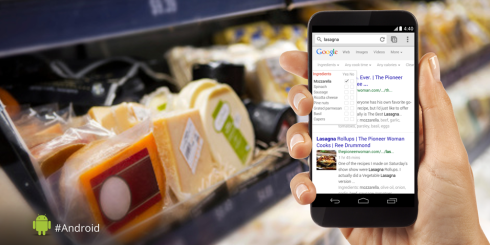 As you know, there’s Google I/O 2014 coming at the end of this month and I really looked hard for hints regarding both the new Android and the new Nexus in this shot. Well, it’s all cheese on the screen, so there’s no lime pie or milkshake here, as the next Androids are rumored to be called. As far as the device goes, it seems to be bigger than 5 inches, maybe at 5.5 inches or 5.2 inches.

The bezels are very slim and the Nexus 6 seems to use the typical on screen Android buttons and rounded upper and lower side, that are typical Nexus traits. It also seems pretty slim, but beyond that I can’t tell you anything else. This would mark a second leak of a new Nexus device in the preview of Google I/O 2014, after the Nexus 8 was also supposedly leak by a preview of the event.

About Kelvin
Passionate about design, especially smartphones, gadgets and tablets. Blogging on this site since 2008 and discovering prototypes and trends before bigshot companies sometimes
HTC Nexus 8 Tablet Gets Rendered Ahead of Google I/O 2014   HTC M9 Envisioned by Neoh Wei Sheng