HTC Touch HD Dual is a Windows Phone 7-Based Design

You must have heard about Antoine Brieux, who has been present on our blog on numerous occasions, due to his innovative designs. Now he’s created the HTC Touch HD Dual smartphone also known as the HTC HDD and confused by some blogs with the already existing HTC HD7. Here it is: 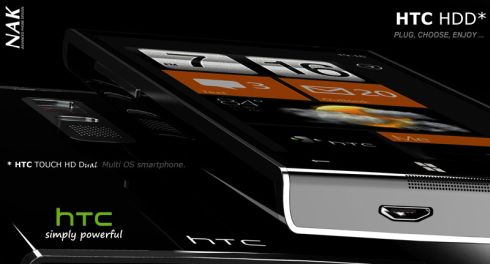 This mysterious handset runs Windows Phone 7, as seen in the image, but it’s also multi OS capable, so Android, Symbian and other platforms will be supported on it. Plus, they don’t call it HD for nothing, so it should support at least HD video capture, HD video playback and HD video out, right? Considering how bulky this phone is, an embedded projector would be no surprise.

What do you think? Is this project even a bit close to reality?

About Thrystan
SoftBank’s Information Revolution Concept is Scary, Brings Together Final Fantasy, Minority Report and Gamer (Video)   Nokia U Concept: The Public Has Chosen the “Design by Community” Smartphone Design