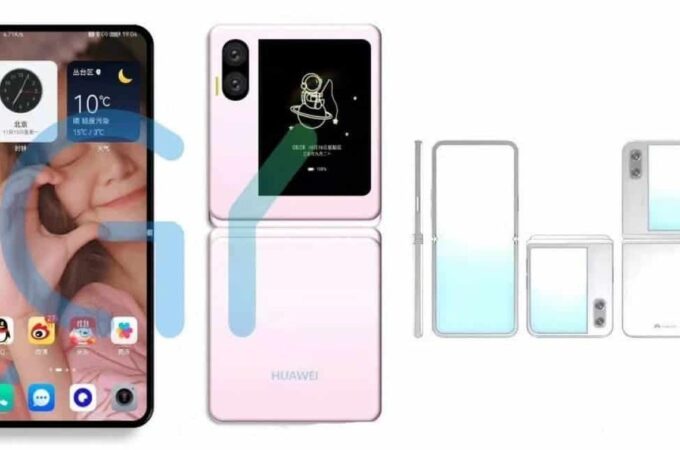 Huawei is said to be hosting a big event in December, where it’s going to launch at least 3 big products. One of them is an E-Ink tablet, the other a Huawei Watch D blood pressure watch and a third one is the star of the show, Huawei Mate V, a foldable flip phone. It has just leaked in renders.

We have two versions of the device here, both without selfie cameras in punch holes in the screen. One has a vertical triple back camera in a line and the other a more discrete dual back camera. Huawei is said to be bringing a simpler hinge mechanism, which is less prone to breakage and also makes the device less expensive. The handset is more similar to the Galaxy Z Flip 3 rather than the MOTO RAZR for example.

The hinge has been reportedly developed by a Chinese OEM dubbed Zhaoli technology. We’re expecting a large external screen, perhaps larger than the Z Flip models. This clamshell is said to be powered by the Kirin 9000 processor, limited to the 4G LTE connectivity only. In Europe the company will switch to a Snapdragon 888 processor and the screen that folds down the middle is said to have a 6.7 inch diagonal.

Mimicking the Samsung approach, the Mate V will be available in a variety of colors, targeting the young audience. The Galaxy Z Flip 3 is already pretty cheap, going below $1000 in some areas. Huawei would have to crack the $899 mark.

About Kelvin
Passionate about design, especially smartphones, gadgets and tablets. Blogging on this site since 2008 and discovering prototypes and trends before bigshot companies sometimes
What can students do to get rid of insomnia: nutrition tips, exercise   Realme GT 2 Pro Render Shows a Nexus 6P Design