For some reason LG has been staying away from the Windows Phone playing field, dominated by Nokia and tested by HTC and Samsung every once in a while. Their first WP devices were decent and they even had a fashion phone at some point… Well, here comes the LG Premier, a Windows Phone 8 concept phone created by Mohammad Mahdi Azimi. 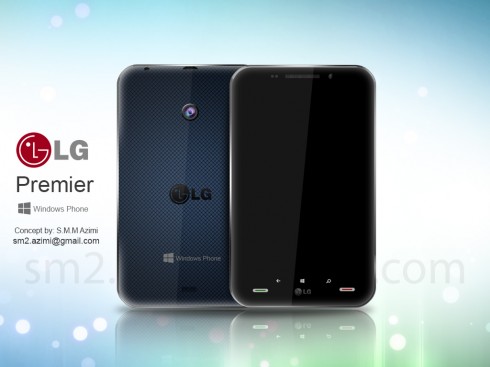 He has given us no specs, so there’s plenty of room for speculation. A quick analysis shows us that there’s no camera flash and that the device is massive, so I’m thinking about a sort of Samsung Galaxy Grand rival here, maybe a 5 inch affordable model. Also, it may be intended for the ladies, considering the exotic color choice at the back. Notice the dotted pattern, that reminds me of the LG Optimus G and Nexus 4.

I can’t really tell if the back is all glass or… leather, since that’s what the texture reminds me of. While I do like the shape of the LG Premier concept phone, I’m not a big fan of the very small Windows Phone buttons and consider the call/end call buttons useless nowadays. And now some imaginary specs: 5 inch 480 x 800 pixel S LCD display, dual core Snapdragon processor, 1 GB of RAM, 5 megapixel camera, 8 GB of storage. How about it?

About Thrystan
The Ultimate Superphone: Optimus One Xperia Galaxy Phone   Next Micromax Flagship Phone Gets Teased; You Decide Its Name and Specs!