Created by KuanGaa Cheen, the Windows Phone surface N handset has a set of crazy specs, that include a transparent display with 4K resolution. As if that wasn’t enough, there’s also a holographic projector on board, as shown in the video below. 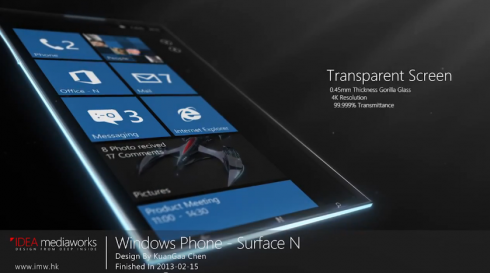 We’re dealing here with an ultraslim Surface phone with a Lumia style format, but much thinner and with an edge to edge display. The Windows buttons have been relegated close to the lower edge of the device and this handset comes with a 0.45 mm thick Gorilla Glass layer. There’s 99.999% transmittance supported by the screen and software modifications are also present.

We’ve got an evolved notification system called the information center, that includes a multimedia controller, fast switcher and sharing methods. There’s also a new app menu, folders and a Lytro field camera with 4K video recording. You can focus after you take the photo and finally we’ve got the Air holographic screen, real world maps and a real 3D display. The Windows Phone Surface N is able to change theme and color of its real edges according to the exterior colors. Crazy, right?