Sony Xperia Honami is All About the One Sony Concept

Over the past days I’ve seen quite a few leaks of the Sony Xperia Honami handset, but today we also get a concept, courtesy of Sanjaya Kanishka. We’re dealing with a model that has been rumored lately together with Sony Xperia Togari, as part of the new One Sony direction. 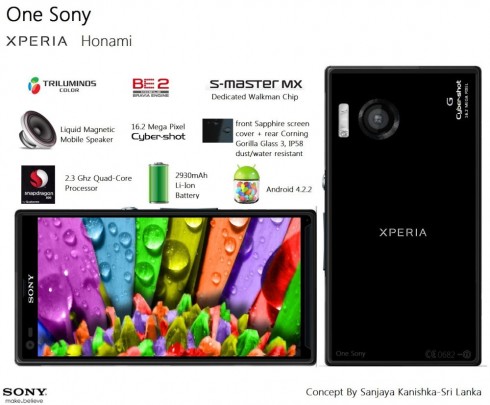 These are devices that will bring together under the same wing all cool Sony technologies, from Cybershot to Walkman, Bravia and Xperia, maybe even PlayStation. While the Xperia Togari is expected to be a 6.4 inch phablet and it remains a mystery, the Xperia Honami is pictured here and specced by the designer mentioned before. The front side of the device is covered by Sapphire glass and the cover involves aluminum oxide compounds, for ultra toughness and scratch resistance.

At the bottom we’ve got a long grille for liquid magnetic speakers. Honami is quite similar to the Xperia XL, in that it covers a large amount of the facade with the display. We get a 5 inch edge to edge 1080p Triluminous display here and specs also include a 16.2 megapixel Exmor RS camera, with Sony G lens and Cybershot technology, plus Xenon flash. Also on board is a quad core Snapdragon 800 2.3 GHz processor, 2 GB of RAM, 32 GB of storage, microSD, HDMI and a 2930 mAh battery. More details in the source link below!