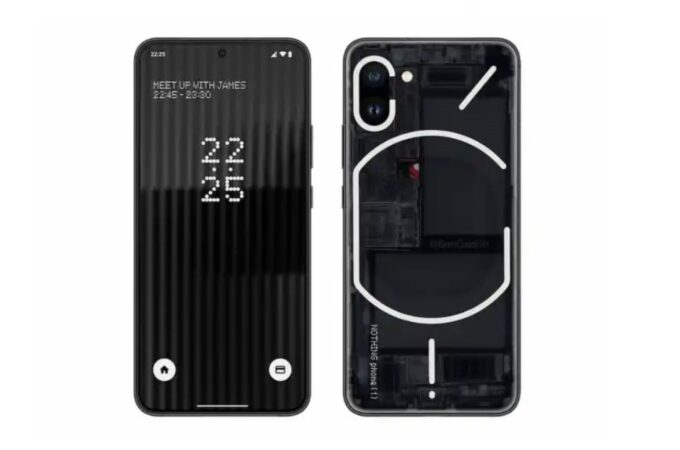 Yesterday Pete Lau, the founder of OnePlus who started a new company called Nothing unveiled his latest project: a smartphone. It’s dubbed Nothing Phone 1 and will debut this summer, but the announcement was quite light on details. Luckily designer Ben Geskin has taken over the teasers and turned them into the render below.

What we know for sure is that the device has a Qualcomm processor inside, most likely a Snapdragon 8 Gen 1 and also that it uses Samsung, Sony, Visionox technology. It should have a transparent back, with lights glowing through it and it runs a skinned Android with Nothing OS on top. Actually will make available Nothing OS as an Android launcher in April, next month. The pattern on the back shown here is a bit childish if you ask me, but the symbols match the ones shown during the event.

There’s also an obsession with stripes and dots, that appear throughout the interface and design. It’d odd for me to see a mere dual back camera, since we’re living in the time of triple, quad or penta cameras, but if it’s a midrange phone, this makes sense. Transparency is a trend I’ve seen happening lately, as transparent phones have been a staple in the gaming area and also in some other niches.

ZTE Nubia alone has made a few transparent phones already, including versions of the Nubia Red Magic 6 and 7. People have a fascination with seeing RAM, CPU, fans under the hood. However, I can’t quite envision a selling point for this phone.

About Kelvin
Passionate about design, especially smartphones, gadgets and tablets. Blogging on this site since 2008 and discovering prototypes and trends before bigshot companies sometimes
How To Find The Perfect Online Casino Game For You   Automation and Innovative Technologies