We have seen a Nokia phablet before, but it was limited to a Galaxy Note-like diagonal. Now we get a bigger device, a 7.5 inch phablet created by Edgar Mkrtchyan and called Nokia 1002. The device runs Windows 8 and it’s based on a 1.8 GHz quad core processor. 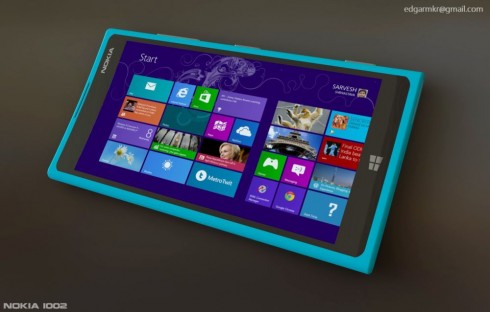 It measures 11 mm in thickness and its screen is a 7.5 inch unit with a 1800 x 900 pixel resolution. Other features include an 8 megapixel Carl Zeiss camera, a 3.2 megapixel front camera and the shooter at the back also has a LED flash and 108pp video capture. Nokia 1002 Phablet offers 64 or 128 GB of mass storage, as well as microSD card slot and SkyDrive, plus USB on the go. It has a 8000 mAh battery under the hood and as far as connectivity goes, you get microUSB 3.0, HDMI, DLNA, NFC, Bluetooth 4.0 and Nokia AV 3.5.

The phablet has pretty much the same virtual keyboard as the Windows Phone and Windows 8 platforms, adapted to the size of the screen and there also seems to be a sort of Home button on the side. I can see there’s also a camera button and the whole Nokia 1002 is a very curved concept tablet. The idea here is to make the screen curved in order to eliminate contact with the ground once the device falls face down. Considering all the features and the OS choice, I’d say that such a phablet would be priced at around $1000 or so.