I am sure you know that in a few hours Nokia World 2012 will debut and we will see the future of the Nokia Lumia series. The Finnish company will launch its first Windows Phone 8 devices and maybe we’ll also see the first Lumia Pureview phone. It’s true we had a lot of concepts here from that range, but now let’s have a look at some leaked pictures of upcoming models, courtesy of @evleaks on Twitter. 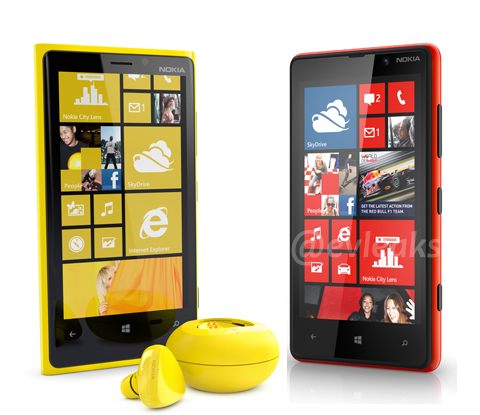 So, we’re dealing with the Nokia Lumia 920, rumored to include a Pureview camera and 4.5 inch HD display, plus dual core CPU. As you can see, this model doesn’t stray too much from the N9/Lumia 800 design and hopefully its body is more compact than the one of the Lumia 900, that I found to be huge. The Lumia 820 is a 4.3 inch affair and it was previously leaked as Nokia Arrow. This one adopts a wider design and a plasticky case, coming in varied colours, directed to the young public.

There’s also a Nokia Lumia Charging Pad pictured, meaning that future WP8 devices from te company will support wireless charging via this mouse-like accessory. I also saw a speaker of sorts, that looked very cool. Maybe it’s a NFC speaker? Anyway, what do you make of these leaks and do you think we’ll see a Nokia Lumia Pureview during the Microsoft + Nokia event tomorrow?