Don’t we just adore a concept Nokia made by the Finns? We’ve just come across a new image of a Symbian Belle model that hasn’t been launched and it’s not even a certain product yet… This piece of design was spotted in a recent NFC demo video showcasing the features of this short range technology on Nokia models. 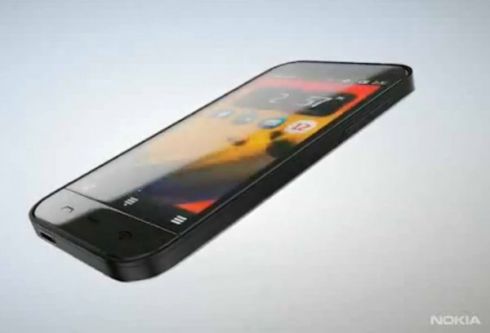 We can compare this unit with a Nokia 700 with a strange chin, or maybe a Nokia 5800, that has been made thinner, lighter and more rounded. Some say that this unit looks very much like the iPhone 4, but frankly what doesn’t look like an Apple handset these days? The real appeal here is Symbian Belle and the fact that this looks like a lower model than the previously leaked Belle units, so we might actually get a good price for a phone like this.

If Nokia decided to implement a curved display on this model, it would look like a Nexus S, but it still would be pretty hot. From the looks of it, this Nokia concept phone is pretty glossy and it should have a 5MP camera at the back and maybe a 800 MHz – 1GHz CPU inside.