The Nokia EOS feels very familiar now, because it has been leaked on all major sites out there, in real life hands on pictures. Today we get a new render based on those pictures, coming straight from Yugatech and Bob Freking. 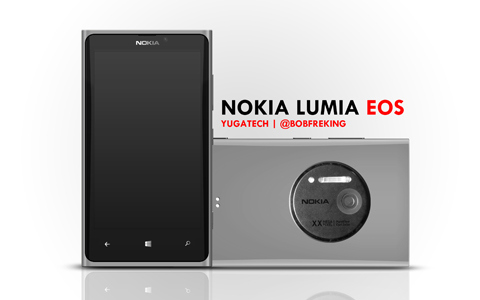 The device seems to have a big and bulky camera module, with an unknown resolution, etched on as “XX”, so it has two figures. It’s most likely the 41 megapixel sensor of the Pureview 808 model, but in a reshaped format. The handset is supposed to be able to do oversampling and loseless zoom, with 3.6x zoom on stills and 12x zoom on clips, without having to compromise on the quality.

Carl Zeiss technology and optical image stabilization are also included, as well as great low light performance. Nokia truly wants to rival the DSLR cameras with this handset, from what we understood. Nokia EOS also brings a Xenon flash, a mechanical shutter and an improved lenses system. Hopefully the price will be decent…