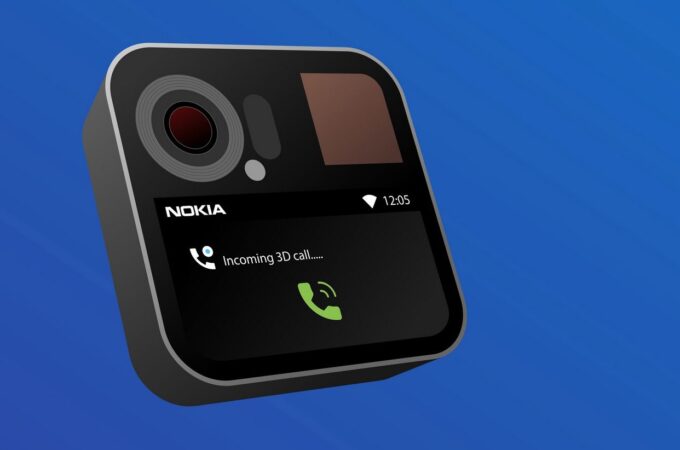 It’s been a while since the smartphone paradigm shifted and the only change we felt lately was the invention of foldables, rollables and the sliding cameras. Otherwise it’s all boring rectangles made of glass, metal and plastic. Nokia Holo Smartphone 2022 tries something different, so let’s check it out.

The creation of designer Mohamed Fawzi, this device is odd from first sight, since it’s square and looks a bit like a GoPro. It’s supposed to be a holographic phone, that ditches screen, buttons, all familiar concepts. Nokia Holo does pack a small touchscreen, about the size of the external one on the Moto RAZR 5G. It also has a solar charge patch, plus a 3D Hologram projector and a 3D camera with LED light. The concept is pretty barebones, sans explanations from its designer, but we can speculate on its ideas.

Obviously, the first iteration is going to be beefy, since a projector requires quite a bit of battery. The solar charging feels like a gimmick and in no way it can generate enough power for a projection system. It’s also odd to have the camera next to the projector, meaning you can’t project and take pics at the same time. We probably also get another back camera… hopefully. I expect a diagonal of 55 inches here, or maybe a brave 100 inches, even though that’s unlikely.

There have been projector phones before, or some with modular projectors attached, but they failed to succeed. Motorola’s version was actually nice and Samsung also had one I think… But the main question is: does the public really want it?