The idea of a Nokia gaming phone isn’t new and the idea of an Xbox Phone has also been approached before. However, combining the two has only happened in recent history, so it’s an idea worth exploring. That’s why we find the Nokia Lumia 0360 Xbox Phone concept pretty interesting, especially with the N-Gage branding also in the mix. 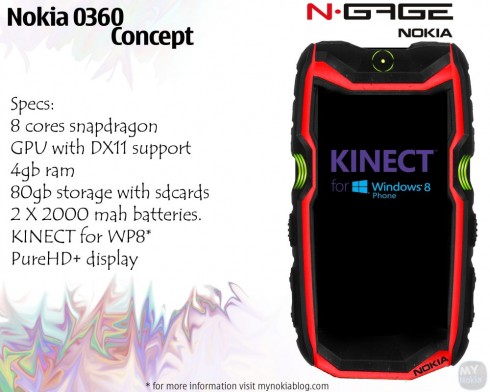 This phone is considered a tribute to both the N-Gage and the Xbox 360 and the result is a pretty bulky gaming smartphone. Nabkawe5 is the creator of the device and in case you’re wondering Nokia 0360, that’s the name of the handset, features an 8 core Snapdragon processor and a GPU With DX11 support, as well as 4 GB of RAM. There’s also 80 GB of storage with SD cards included and 2 x 2000 mAh batteries. Kinect for Windows Phone 8 is here and a PureHD+ Display provides the imagery.

The integrated Kinect camera will allow you to control the Nokia phone with gestures, the ones specific to the famous Xbox sensor/camera system. One of the two 2000 mAh batteries powers the Kinect camera and the heavy consumption areas, like the 5 inch screen, while the other handles normal phone activities. Do you see such a concept happening?