Now that Nokia broke the ice in 2013 with the Lumia 2520 tablet we await further releases of this kind from them. The talk of the town is that they’re prepping an 8 inch tablet and in the meantime we have a look at the Nokia Lumia 1625, which is a tablet concept rendered by Hanz Manuel. 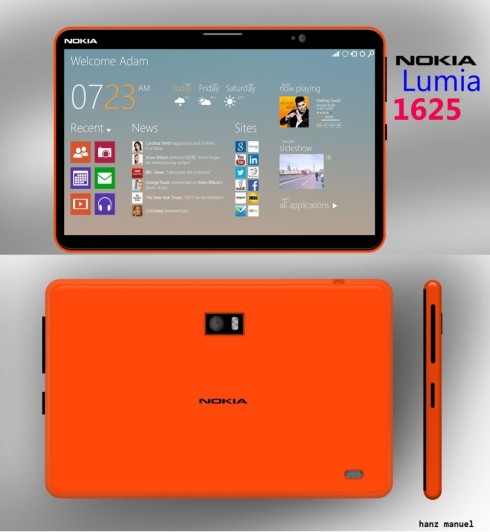 This concept Nokia tablet doesn’t have a specs list attached, but I’m guessing it’s either a 10 or 12 inch slate, because nowadays 8 or 7 inch tablets are rather portrait oriented and this one is all landscape. I can see there’s a camera with dual LED flash at the back and the physical buttons on the side of the device are quite big.

I’m guessing there’s a Snapdragon 800 or 805 inside, as well as 2, 3 or even 4 GB of RAM, who knows? The resolution should be Full HD or maybe 2560 x 1600 pixels and the OS should be Windows RT 8.1 unless this is a futuristic slate with Windows 9 on board. I’m really curious to get my hands on a Lumia tablet and see if it capitalizes on the unique apps thing as much as the Lumia phones do with their cool photo and navigation apps.

About Kelvin
Passionate about design, especially smartphones, gadgets and tablets. Blogging on this site since 2008 and discovering prototypes and trends before bigshot companies sometimes
HTC One M8 Rendered by Nikolai Prettner   Jermaine Smit Working on New Samsung Innov8 Phone and Flexing Tablet