The Nokia Lumia Accent 095 is the world’s first Nokia Lumia tablet, an 8 incher model with Windows 8. At least so says Deviantart user SaphFan32, who created the device and came up with this render below. 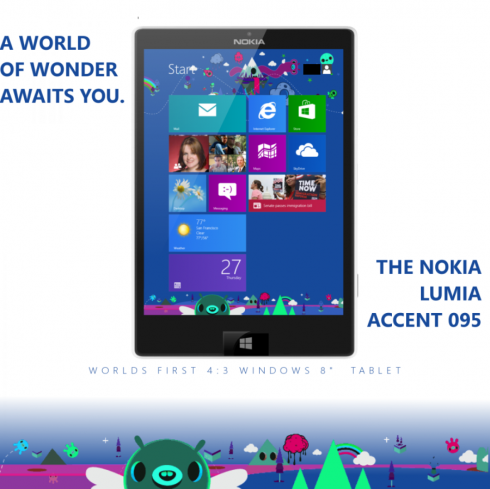 The designer is supposed to a sub $300 4:3 8 inch tablet, one that’s highly portable and meant for a younger audience. The Windows button is a tad big and the sides of the device make me thing of a Nokia Lumia bigger phone. This Nokia tablet seems more oriented towards portrait use than landscape, but that’s not necessarily a problem, since the Nexus 7 worked just fine in portrait for example.

If I were to speculate on the specs, I’d say a HD or Full HD resolution should be here, plus 2 GB of RAM, 32 or 64 GB of storage, LTE and a quad core Snapdragon S4 Pro CPU or maybe a Tegra 3, since I bet it’s cheaper now. I like the wallpaper of the slate, making it feel childish and all. What do you think of the concept Nokia slate?

About Thrystan
HTC Zara Gets Rendered by Suman Chatterjee   What do You Think About the Moto X Design?