If you search “Karl Jayson Panase” on our website, you’ll notice that he has rendered a lot of Nokia concepts over the past months. This one is a Nokia by Microsoft handset, a branding that’s expected to appear on handsets coming after the integration of Nokia Devices within Microsoft. 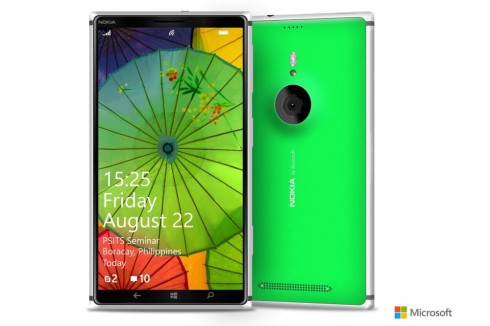 As you know, IFA 2014 is coming and with it Microsoft is bound to unveil new Lumias, supposedly including a high end cameraphone with a high megapixel count. Now let’s see what we’re dealing with here: a bright green handset, with metallic edges, a polycarbonate back and discrete capacitive buttons, although we could do without them, since WP 8.1 brought support for virtual ones.

The device has a dual LED setup, even a triple LED one, if we also count the yellow-ish dot below them. The camera lens is huge, perhaps on the same level as one on the Lumia 1520, but probably this is not a sensor bigger than the current 20 megapixel ones from Lumias. An evolution compared to ALL Lumias would be making this handset slim, maybe at the level of 8 or even 7 mm, if possible. It would be a sign that Nokia has learned to make more compact cameras…

What do you think of this Nokia design?

About Kelvin
Passionate about design, especially smartphones, gadgets and tablets. Blogging on this site since 2008 and discovering prototypes and trends before bigshot companies sometimes
Google Nexus 360 is a Smartphone, That Converts to a Smartwatch (Video)   Introducing: the Sapphire Glass Phone, Created by Jennarong M.