The first Nvidia Shield console was received with mixed feelings by the gaming community, but a gaming-focused tablet with the Shield branding may just fix that. This device, also known as the Nvidia Shield 2 has just leaked and it’s shown below. 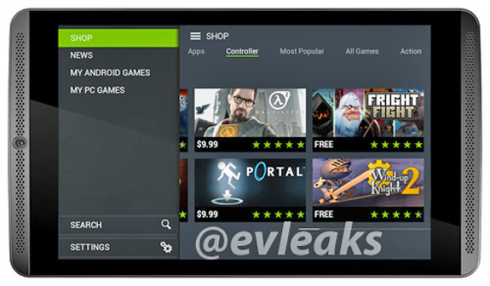 @evleaks is the author of the leak and the newcomer is said to come in September with a price tag of around 400 euros. The product will feature a Full HD 8 inch display, obviously the Nvidia Tegra K1 CPU and its famous Kepler GPU with 192 cores. There will be 2 GB of RAM inside, 32 GB of storage, 4G LTE support and a 5 megapixel back camera. This model will also offer a micro SD card slot, a micro HDMI port and a micro USB 2.0 port.

It will run Android KitKat, probably in a customized version with the Tegra Zone at the forefront. Judging by the image shown here, we’re about to get some pretty big and impressive speakers as well and I sure hope the battery can keep with the hardcore gaming that will be done on this slate.