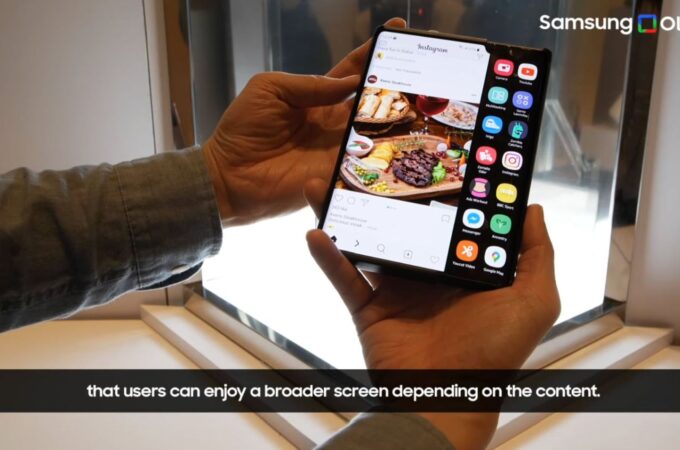 This past week marked the beginning of the CES 2022 tech show in Las Vegas, where there were quite a few prototypes and concept phones on show. Samsung had of course a booth to show off some items and since they’re one of the biggest name in the foldable area, they sure had some innovation for us, including rollables and dual or triple foldable screens.

These are all proof of concept screen prototypes, meant to inaugurate or promote formats. First we saw a double foldable known as the Samsung Flex S, with two hinges and reaching a tablet diagonal, close to around 10 or 12 inches when opened up. It was bundled up like an accordion and became a thicker phone when folded. It closed up like a book, covering all screens.

Then we had the Flex G, which was folded like the letter “G” and had its side flaps closed on on the front and one on the back. This one could still have a screen exposed in the end. We also saw a Samsung Flex Note, which is basically a whole screen laptop, sans keyboard. The two screens are separated by a hinge and one can become a virtual keyboard or simply more viewing space. It kind of reminds me of the ZenBook 17 Fold OLED, also shown off at CES 2022.

It offers a 13 inch screen in tablet mode, but reaches 17 inches when opened up.

The most interesting of the bunch was definitely the Samsung Flex Slidable, a rollable phone with a tiny extra portion of screen on the right side, that pushes out of the device’s body, expanding its viewing space. It’s about the size of two typical Samsung Edge bars/menus and that’s exactly what it shows. You’re not gaining much screen and you risk blocking that part with dust, lint, particles and others.

These are all prototypes, so there’s no guarantee they will get made some day.

About Kelvin
Passionate about design, especially smartphones, gadgets and tablets. Blogging on this site since 2008 and discovering prototypes and trends before bigshot companies sometimes
Top 5 VPNs for Europe To Use on Your Phone and PC   Best mobile phones for university students