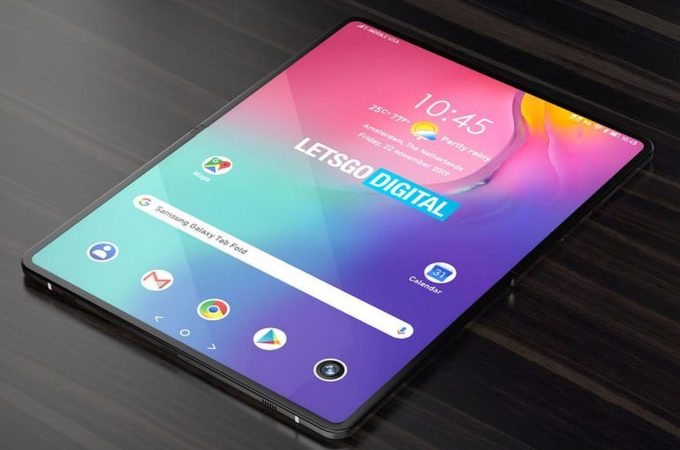 We’ve been covering quite a fair share of foldables lately and noticed a crazy avalanche of clamshell foldables after the Moto RAZR 2019 came out. Now we go back to a less explored segment, the one of foldable tablets. Only Lenovo tried one out so far, but Samsung is also coming in hot.

Fresh out of the patent board comes this Samsung Galaxy Fold tablet, which was patented by Samsung and now gets rendered by Letsgodigital. Only Lenovo showed off a sort of foldable laptop/tablet a while ago and it looked pretty rough around the edges. Samsung has been flirting with foldable tablets for a while now, patenting some even before the first Galaxy Fold was out. To be honest, the Samsung Galaxy Fold tablet is not that different from the Galaxy Fold.

However, the design is a bit cleaner and more elegant, I feel. It’s also wider and it folds horizontally. Folded open it creates a wide and long flexible screen. There’s no more “front screen” this time, as you’re not going to be holding this device like a phone. We also can’t see any cameras here, but there may be one hidden under the screen for selfies. There’s also no notch and the hinge is similar to the Galaxy Fold one.

A laptop format of the device is shown off in the patent sketches, with one half of the screen used for viewing content and one for input. There are quad speakers in the mix here, twice as much as the current Galaxy Fold. This device actually makes more sense than the current Galaxy Fold and it also looks better than the Surface Duo and Surface Neo from next year. The problem is that you’re probably going to have to spend $2000 on a tablet…

About Kelvin
Passionate about design, especially smartphones, gadgets and tablets. Blogging on this site since 2008 and discovering prototypes and trends before bigshot companies sometimes
Samsung Galaxy S11 Plus Has the Largest Camera EVER, Featuring 7 Sensors   Samsung Galaxy S11e Renders Shown Off by @OnLeaks, in Beautiful Blue