You probably know that Samsung decided not to sell the Samsung Ativ Tab tablet in Europe or USA, so this product will most likely never see a wide rollout. We can consider it cancelled, but designer Mohammad Mahdi Azimi proposes a slightly different product, under the same name. Meet the new and improved Samsung ATIV Tab: 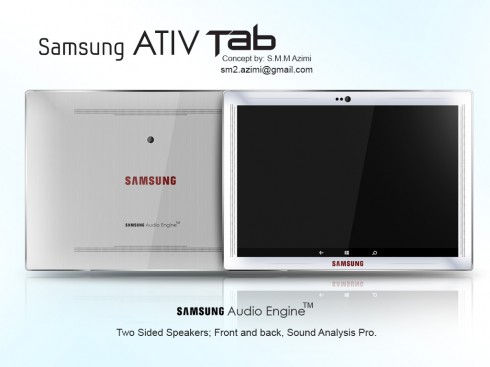 The device runs Windows 8 and has a new Samsung Audio engine, that provides it with a great audio experience. It has two sided speakers, at the front and back and a technology called Sound Analysis Pro. The device looks a bit like an old school PC monitor, if you ask me. The speakers are huge, taking a big part of the tablet’s design. It all seems encased in metal and this model looks a bit bulky.

This Samsung Ativ Tab concept probably has the usual specs of a higher end modern slate. So, if it runs Windows 8 it’s Intel Core i3 up to i7 and if it’s Windows RT we’ve got quad core Nvidia Tegra 3 probably. So, which model do you like more, the real one or this concept?