Samsung Galaxy A71 Rendered by @OnLeaks, Also With 360 Degree Video 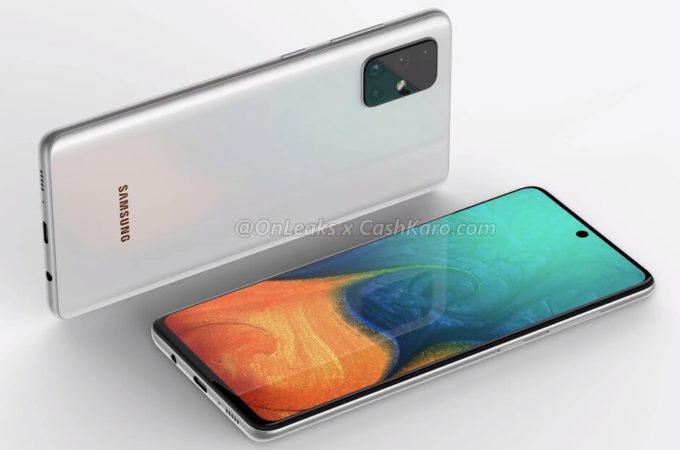 If you’ve been following the Twitter account of @OnLeaks for the past week or so, he’s been highly productive, leaking renders of the Galaxy A51, Galaxy A71, Galaxy S11 and recently S11e. We already covered the S11 one and now it’s time to check out the A71. Which, by the way is not that different from the other ones…

It seems that Samsung will go with a single design identity in 2020: rectangular devices, with curved screens and singular selfie punch hole cameras. The cameras will be placed on the left side in a rectangular module, sometimes the sensors shown in the shape of the letter “L”, other times just 3 sensors in a line. Samsung Galaxy A71 will be the follow-up of the very well liked Galaxy A70, which had an excellent battery and solid screen.

Galaxy A71 will be very similar to the Galaxy A51, only bigger. I’ll have a larger screen, also a quad back camera, with the 4 sensors integrated in an “L” shape. I expect a 64 MP or 108 MP camera in the mix, plus Time of Flight, ultra wide and telephoto cam. The thickness goes to 9.22 mm in order to leave enough room for the bump at the back side. An in display fingerprint scanner has also been confirmed by various leaksters, which is not exactly a surprise here. The source also talks about a 6.7 inch screen and a 7.9 mm waistline if you ignore the camera bump.

I sure hope that the rumors about the CPU aren’t real and we get something better than the Snapdragon 675 that we got on the Galaxy A70. The build obviously includes glass and metal, or worst case scenario the Glasstic that worked well for Samsung, especially in the coral hue. I find the camera bump to be a bit of a turnoff on the Galaxy A71 if I’m being totally honest.

About Kelvin
Passionate about design, especially smartphones, gadgets and tablets. Blogging on this site since 2008 and discovering prototypes and trends before bigshot companies sometimes
Samsung Galaxy S11e Renders Shown Off by @OnLeaks, in Beautiful Blue   Xiaomi Foldable Clamshell Phone Channels Motorola RAZR 2019 and Then Some