I’ve seen my share of Samsung Galaxy Note 3 concepts and it was logical that once the Galaxy S4 was out, rumors about the next Galaxy Note would start. Today’s render is made by Deepak Ahuja, who goes with an elongated design and a device with powerful specs, but also realistic. 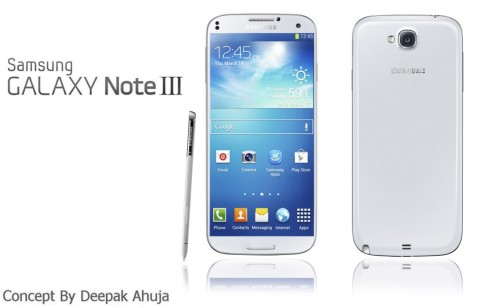 The device runs Android 4.2.1 Jelly Bean and packs a 6.33 inch Super AMOLED HD+ display, with a 1920 x 1080 pixel resolution. This screen has a 441 ppi pixel density, the same as the one of the Xperia Z, for example and the Galaxy S4. Inside we’ve got a 2 GHz Octa Core processor, composed of a 1.7 GHz ARM Cortex A15 high performing quad core CPU and a 1.2 GHz ARM Cortex A9 chipset for other purposes.

At the back of Galaxy Note 3 we’ve got a 13 megapixel main camera with LED flash, while upfront there’s a 2.1 megapixel shooter with BSI and CMOS. Finally, we get 3 GB of RAM, 16/32/64 GB of storage and a 3700 mAh battery. The Galaxy Note II and Galaxy Note 1 were wide enough, so in order to increase the diagonal Samsung will have to work on length rather than width, that’s why the device is so long. Also, notice the slightly dotted pattern at the back, reminding me of the Galaxy S4.

About Thrystan
Nokia Lumia 930 Catwalk Rendered by Juha Luoma, Corrects Every Mistake of the Lumia 920   The Ultimate Superphone: Optimus One Xperia Galaxy Phone