The folks of Mobogenie have posted on Google+ a new Samsung concept phone, a device that seems to be different from the usual Sammy renders. This handset features a 4.6 inch TFT Super AMOLED screen and 8 GB of internal storage, meaning it’s a midrange or even low end handset. 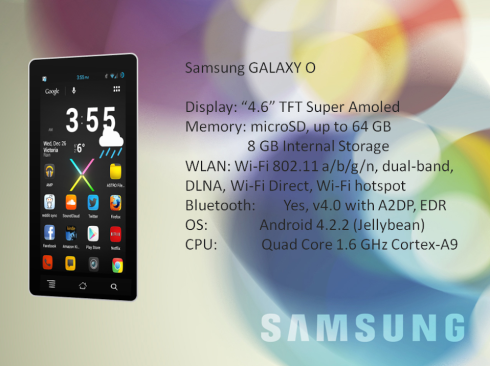 Samsung Galaxy O has a microSD card slot, WiFi dual band, DLNA, WiFi Direct, WiFi hotspot and Bluetooth 4.0. The device runs Android 4.2.2 and relies on a quad core 1.6 GHz Cortex A9, which is pretty modest by today’s standards. The Galaxy O looks very thin and has a rectangular format. We’ve got a capacitive set of buttons below the display and actually they are kind of big to look appealing.

I can see a bunch of preinstalled apps that you normally won’t find on a TouchWiz device. Those include Soundcloud, Firefox, Amazon, Netflix and Astro File Manager. What do you think of the Samsung Galaxy O concept phone? I feel that it’s not very modern.