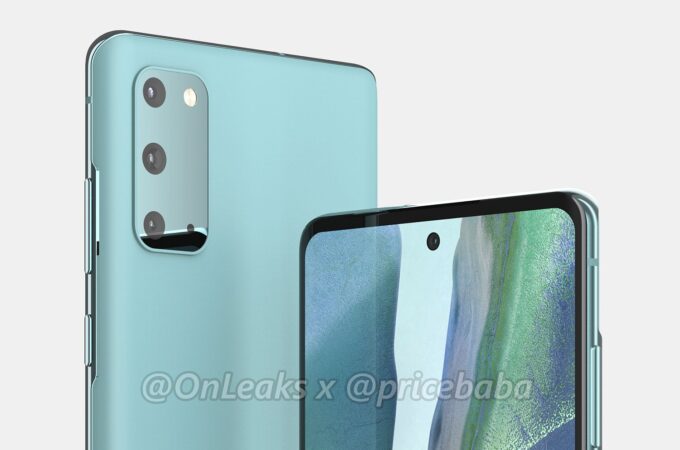 There’s a been quite a few leaks of the Samsung Galaxy S20 Lite for a while here, up until the point we learned it was going to be called Samsung Galaxy S20 Fan Edition. While we did see all the specs leaked, today is the first time we get to see renders of the device, courtesy of @OnLeaks and Pricebaba. You can find them after the break.

Samsung Galaxy S20 FE 5G packs a plastic body, but with the matte/frosted approach of the Note 20 making it seem more premium. It also has a camera design that’s somewhere in between the S20 and Note 20. I truly like its mint green version shown here, somehow reminding me of the OnePlus Nord green, but in a much lighter hue. Overall, this looks similar to the standard S20 and comes with a flat screen with a diagonal between 6.4 and 6.5 inches.

It has a single punch hole for the 32 MP selfie camera and it’s rumored to also have a 120 Hz refresh rate. The frame is made of a shiny metal, chromed even, according to some sources and the dimensions are 161 x 73 x 8 mm. There’s no audio jack here and we’re guaranteed to get an in display fingerprint scanner. Sadly, there’s no Snapdragon 865 for everyone as rumored, instead Europe will get the same Exynos 990 CPU.

We should also get 6 GB RAM, 8 GB RAM versions and up to 512 GB of storage. Camera-wise, tipster Ice Universe reports that the phone is going to sport a 12 megapixel Sony IMX555 primary camera, the same sensor as the Galaxy S20. The other cameras are a 12 MP ultrawide shooter and an 8 MP telephoto cam with 3X optical zoom. Also expect IP68 certification and a $750 price tag. The battery should be around 4500 mAh in capacity. Samsung Galaxy S20 FE 5G should debut in October.

About Kelvin
Passionate about design, especially smartphones, gadgets and tablets. Blogging on this site since 2008 and discovering prototypes and trends before bigshot companies sometimes
Samsung Galaxy Note 21 Ultra Gets the Ben Geskin Render Treatment   Motorola Edge 2 Alpha Gets Dual Display, Huge Screen at the Back