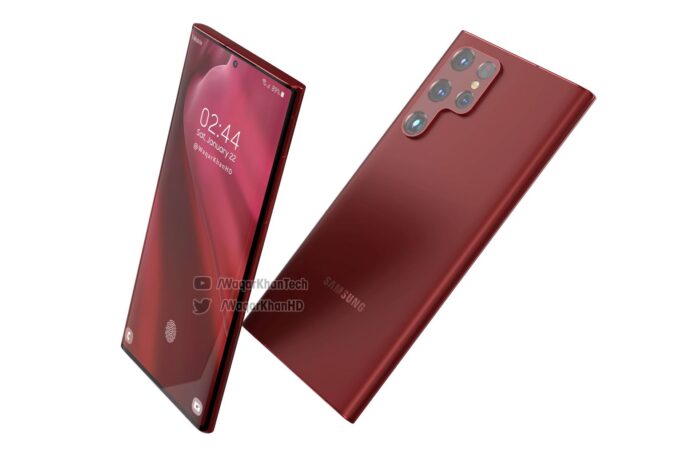 Samsung Galaxy 22 Ultra may have been delayed to February, but that doesn’t stop its concepts from popping up. Designer Waqar Khan has just come up with a new version of the S22 Ultra and there’s a video of it below.

The handset doesn’t get rid of the punch hole selfie camera, but it does receive a stylus slot, plus a squarer design, which is inspired by the Galaxy Note. We also get the L shaped back camera, which is not bad looking to be honest. I find it shocking that the device can integrate a potent periscope telephoto camera, without increasing the camera bulk.

The device may be flat at the top and bottom, also boxy, but it curves to the sides, front and back. In some ways it’s a bit old school. The problem is with the component arrangement inside. We have to wonder what Samsung had to shuffle around and give up on in order to integrate an S-Pen silo. Since people were willing to get back to the iPhone 4 design, I guess that angular top and bottoms and curved sides could be hyped.

We’ve also heard that the device could be produced in smaller batches and the Galaxy S22 series will be produced in 20 million units, while the S21 was produced in 30 million units. The S22 Ultra would take up to 5-6 million apparently and the S22 10 million. The S22+ would be the least produced. The colors shown here include a black one, white one, red and also beige.

Let’s face it, it’s a Galaxy Note rather than a new Galaxy S22 Ultra.

About Kelvin
Passionate about design, especially smartphones, gadgets and tablets. Blogging on this site since 2008 and discovering prototypes and trends before bigshot companies sometimes
Samsung Galaxy S22 Ultra Aluminum Dummy Unit Leaked On Video   How to find the best casino apps for your phone