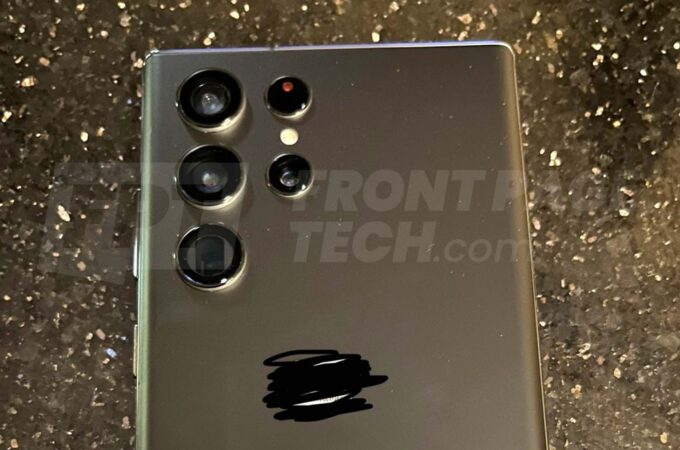 The biggest leak of the Fall 2021 is upon us and it involves the biggest Samsung flagship of 2022: Samsung Galaxy S22 Ultra. We’re dealing with leaked hands on photos revealed by the guys of FrontPageTech, who have quite the leak on their hands.

Expected to debut towards the end of February 2022, the Samsung Galaxy S22 Ultra will ditch the camera island, having the 5 camera sensors popping out straight from the back side. It’s no surprise we get to see the device this early, since it’s supposed to enter production either this month or in December. The device has a pretty curved display upfront with curved corners and even narrower bezels compared to the S21 Ultra and S20 Ultra.

The shocking part is that we also get to see a built in S-Pen sot. The camera are is shaped like a tear drop or the letter “P”. The integration of the S-Pen puts the final nail in the coffin of the Galaxy Note series. The only specs we get from this source regards the cameras and it’s very much the same as the S21 Ultra one: 108 MP main cam, 12 MP ultrawide cam, 10 MP 3X telephoto cam, 10X telephoto unit. The fifth cam is probably an extra sensor, a ToF or LiDAR maybe.

With the bezels being as flat as seen here, it channels the Galaxy Note series more than the Galaxy S to be honest.