The latest Samsung Galaxy S4 concept comes from Shahin Jazirian, who imagined a device with sharp edges and also some pretty realistic specs, maybe aside from the whole 4GB of RAM thing. This device uses a micro SIM, weighs 144 grams and packs a 5 inch Super AMOLED capacitive touchscreen with a 1920 x 1080 pixel resolution. 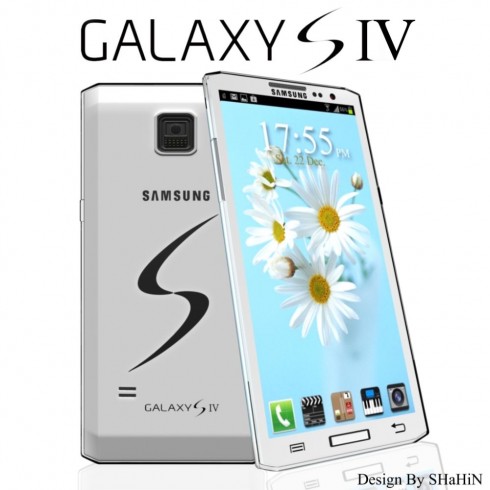 Gorilla Glass 3 is also on board, as well as a microSD card slot and up to 128 GB of internal storage. HSDPA 42 Mbps is also here, as well as LTE, dual band WiFi, DLNA, Bluetooth 4.0, NFC and microUSB. At the back of this Samsung Galaxy S4 render there’s a 13 megapixel camera with autofocus, LED flash and quality check. The cam does simultaneous HD video and photo capture, geotagging, touch focus, face and smile detection and image stabilization. Also, the camera captures in 1080p at either 30 or 60 FPS.

The handset has at the front a 1.9 megapixel camera and it runs an interesting flavour of Android: Jelly Bean v4.4.4. There seems to be a fetish with the number 4 here since designer Shahin Jazirian also says that the device has a quad core 2.4 GHz Cortex A10 Exynos 4444 Quad processor. Also there are 4 GB of RAM and a Mali 444MP GPU. Strange, right? Finally, for those of you wondering, there’s a 2020 mAh battery on board and the price tag is… not 444 euro, but rather 777 euro.

Is this a realistic concept? What do you think?