And yet Again: Samsung Galaxy S5 Rendered With New TouchWiz

We had a piece on this website covering the leak of the brand new TouchWiz UI from Samsung prepared for the Galaxy S5 and maybe even Galaxy Note 4. Well, Bob Freking has based his latest Samsung Galaxy S5 render on that and delivers us a design via Yugatech. 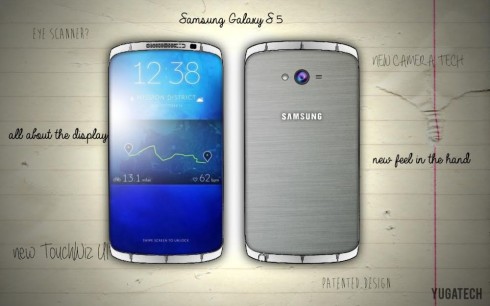 The overall design of the phone is inspired by those famous leaked Samsung sketches, while the UI emulates the leak I mentioned above. This is more of a sketch than a proper 3D render, but we get a good idea of what may come. Most of the Galaxy S5 concepts I’ve seen opt for edge to edge screens, so it would be a shock for Samsung to launch a device that doesn’t use this approach.

I can’t seem to spot any physical buttons here, so maybe there’s none and for some reason I seem to have noticed an S pen slot at the back of the phone. The Galaxy S5 also incorporates a potent front camera for head gestures (rumored this week) and eye scanner for authentication. It all ends with 4 GB of RAM and a metallic chassis, plus a 2K display and Snapdragon 805 CPU.

About Kelvin
Passionate about design, especially smartphones, gadgets and tablets. Blogging on this site since 2008 and discovering prototypes and trends before bigshot companies sometimes
iPhone 6 With iOS 8 and 5.7 inch Display Envisioned   13 Inch iPad Pro Tablet Rendered by Set Solution (Video)