There’s only one thing we love more than concept phones here, concept interfaces! That’s why I was so glad to hear that @evleaks had managed to score a few shots of the future TouchWiz. 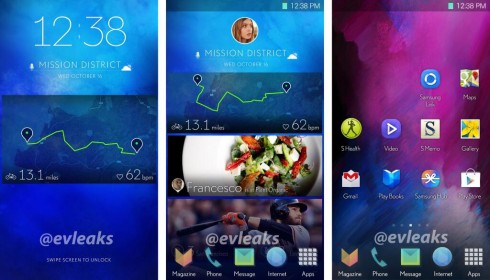 The 2014 TouchWiz UI is probably the one that will be applied on top of Android 4.4 KitKat on the Galaxy S5. It seems very clean and minimalistic and you’ve got to love those dock area icons with their gradient thing going on, so very iOS 7-like. I also spot a new S Health widget, with miles and pulse included and another widget for the weather, voice search and time/date.

We might as well be seeing a new homescreen like the Google Now one on the Nexus 5, only this time tweaked to integrate S Voice and Samsung’s own data. You know what would be cool? A special homescreen for all the sensor input on the Galaxy S5: temperature, humidity, steps taken, brightness, pressure and other stuff. Nice backgrounds by the way!

About Kelvin
Passionate about design, especially smartphones, gadgets and tablets. Blogging on this site since 2008 and discovering prototypes and trends before bigshot companies sometimes
Nokia Lumia 3310 Brings the Nokia 3310 to 2014! (Video)   HTC One Plus Design Finalized by Jermaine Smit