I had my doubts about the efficiency of a 5 inch display on a smartphone, but the likes of Xperia Z and Samsung Galaxy S4 proved me wrong, as they’re very comfortable devices to use. Now we move further, to 6 inches via the new Samsung Galaxy S6 render, shown below. 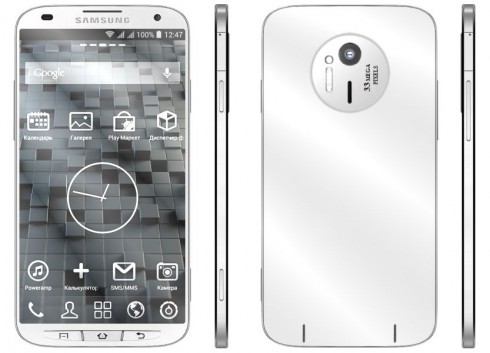 The render was sent to us by uva7 dance and it depicts the Samsung flagship phone of 2015. The camera at the back is weirdly similar to the one of the Nokia EOS, that recently leaked on the web. As you can see the side of the phone looks a bit like the iPhone meets HTC One, while the back is clean and only stands out through the Xenon flash packing camera with 33 MP resolution.

For some reason at the bottom we’ve got physical buttons and the specs of the Galaxy S6 include a Full HD 6 inch display (Super AMOLED), 6 GB of RAM, 32/64/128 GB of storage, a 33 megapixel camera at the back and a front 8 MP shooter, plus a 4000 mAh battery. This is a dual SIM phone that measures 6 mm in thickness and I can’t understand why the designer skipped Galaxy S5 and went straight to this model. Also, isn’t 6 GB of RAM too much?