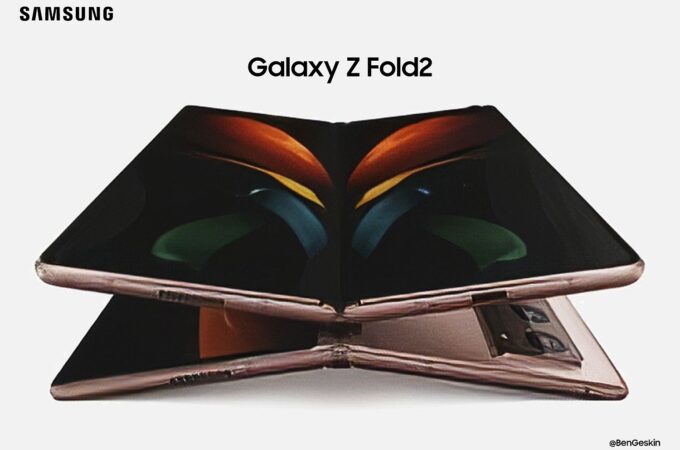 Samsung stated over the past 24 hours that it’s going to unveil 5 products on August 5th during the Unpacked event. One of the latest ones that has leaked is the Samsung Galaxy Z Fold 2. The device appears in the Mystic Bronze hue and it was actually leaked in a tiny pic, which was cleaned up and edited by designer Ben Geskin.

Okay, so first of all, it has the massive lenses of the Galaxy Note 20 on the back, as you can see on the lower right area. There’s also the same speaker setup as the Galaxy Fold and some people are assuming that there’s a punch hole selfie camera hidden in here. The latest rumors also talk about a larger external screen, that now graduates to a 6.23 inch diagonal, after the OG 4.6 incher got some flac. The internal screen also gets upgraded from 7.3 inches to 7.7 inches.

Also it goes to 120 Hz refresh rate. We are also supposed to get a Qualcomm Snapdragon 865+ CPU inside, 12 GB of RAM and 256 GB of flash storage. We should also get a 4365 mAh battery, with fast charge at 25W and 15W wireless charging. I can’t see any S Pen slot, but that was a rumor anyway, so I had zero expectations for it. The good (or bad news for some) is that the device is said to have the exact same price as the Galaxy Fold 1.

I expect some UTG protection for the screen, too. Honestly speaking I don’t get the hype for the Mystic Bronze hue…

About Kelvin
Passionate about design, especially smartphones, gadgets and tablets. Blogging on this site since 2008 and discovering prototypes and trends before bigshot companies sometimes
Samsung Galaxy S30 Ultra Adds an Extra Screen, More Cameras   Sony Xperia Edge Xtreme is a Button Less and Port Less Smartphone With a Huge Screen