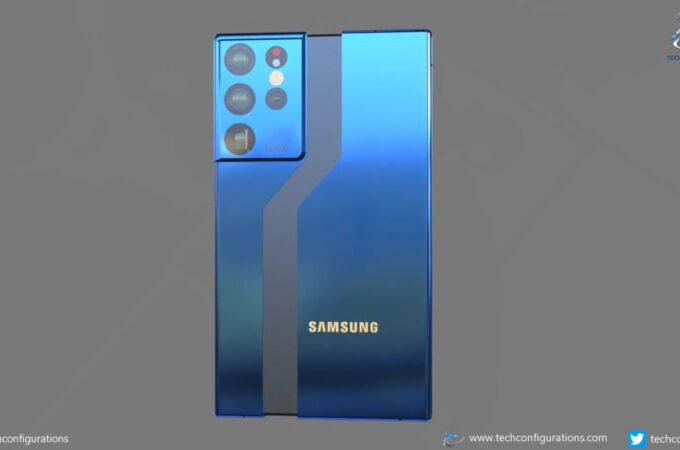 Ever since the first hint of a rollable phone came out, Samsung was out there patenting devices of this type. It’s Oppo who has the premiere though, courtesy of the Oppo X 2021, but that’s far from a finalized phone. It lacks volume buttons and a selfie camera, to name just two problems. Now here comes the Samsung Galaxy Z Scroll, with an added bonus of a stylus.

This concept has been created by Techconfigurations and be sure to watch its video at the end of this piece. The Samsung Galaxy Z Scroll is rendered in beautiful blue and feels like a revamped Galaxy Note. It has a huge camera module at the back inspire by the S21 Ultra one and also adopts a centered selfie camera punch hole upfront. The 6.9 inch AMOLED screen is able to expand into an 8 inch panel, with the aid of a rollable mechanism. It slides on tracks, much like tank ones, using motors to pull and tug a flexible OLED panel.

There should also be two metal panels intertwined like combs to prop up the whole thin as it expands or contracts. We also get a 5000 mAh battery with fast charging at 65W, multiple colors choices and a periscope camera with 100X zoom. The device seems to be quite wide even without the slide out part so imagine how wide it would get in the end. The gap left by the rollable piece is quite bit at the back I have to say. It’s also not very clear if the S Pen is inserted into a special hole in the body or held onto a special case like the S21 Ultra is doing right now.

What I admire the most here is how thin this device is, which sounds impossible, considering how much technology and mechanisms are involved. Honestly I don’t think the rollables will be a hit as they’re quite hard to manufacture.

About Kelvin
Passionate about design, especially smartphones, gadgets and tablets. Blogging on this site since 2008 and discovering prototypes and trends before bigshot companies sometimes
Huawei P50 Gets New Official Looking Renders, Designed by Waqar Khan   The Most Common iPhone Problems And How To Remedy Them