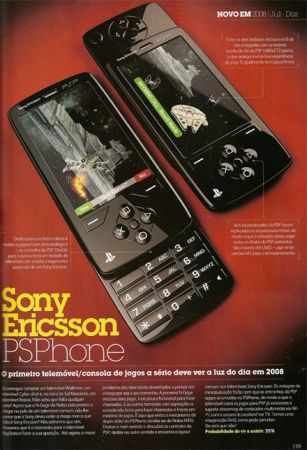 Stardate 18-02-2008… These are the voyages of the starship Rumorprise, bound to find the PSP Phone any minute now. It’s barely reached planet Stuff (magazine) and it seems that the device will feature a 480 x 272 display, a mini analog stick and finally lack that useless UMD drive. We’ll be playing game via M2 and what you can see above are (as mentioned) scans from Stuff magazine, which I spotted thanks to the folks of engadget. There’s also a supposed launch date in the magazine: July-December plus a few other details you’ll find out by reading the rest of the entry.

A 3 inches display is placed between both keyboards featuring the above-mentioned resolution, which pretty much solves the problem of comfort when it comes to movies and gaming. The whole sliding mechanism is built in order to give you easier access to the phone’s gaming control system or to its keypad, keeping the pure Sony Ericsson ergonomics. The Stuff magazine article ends with a “probability of existence” of about 35%, but that’s more real than we’ve ever seen so far under the PSP Phone branding. Think it’ll hit the market before the 3G iPhone or the Android devices?

About Thrystan
PlayStation Power on an iPhone-like Device, branded Nvidia   Chute Concept Phone, Made Out of Bamboo