I have to admit that the concept shown below was done 10 days before the Sony Honami started leaking, that’s why it doesn’t resemble the real life pics at the end of the article… However, a cameraphone like this would make a killer Nokia EOS rival. 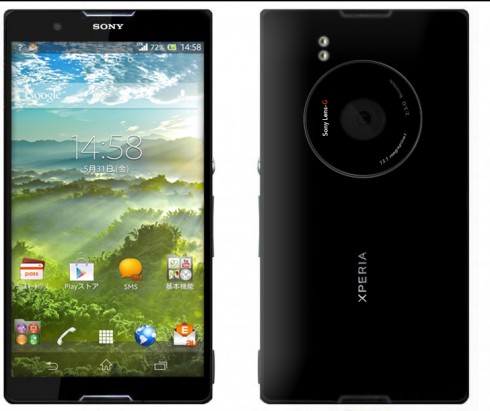 Sony Honami seems to be very much inspired by the Xperia Z in this render and it features a camera with dual LED flash, Sony Lens G and 20+ megapixels. In real life, the handset is nothing like the concept, since it has a matte back, a very discrete camera and supposedly a Xenon flash. This new model is expected to pack a 1/1.6″ sensor with 20 megapixel resolution and a Snapdragon 800 processor.

The pics below also show a dedicated camera key, a microSIM card slot and microSD on the sides, both with lids, so this is probably a water resistant phone. Finally, the Sony Xperia Honami is expected to run Android 4.2 and have a 5 inch Full HD display. So, do you prefer the render above or the real pictures below?

[via Esato and Just Another Mobile Phone Blog]