Adam Safranek has imagined the way a new Android L device would look, one that’s part of the Nexus series. He called it Nexus L and made it a Sony device. The design is very basic, a rectangular slab of material, probably polycarbonate or glass, if it’s really Sony. 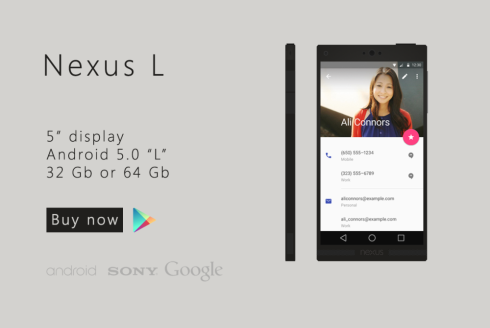 We get the trademark Android L virtual buttons, a 5 inch display and 32 or 64 GB of storage. I’ve played with rectangular phones before and one thing I must say is that the creators of these devices must be very careful with the size. You can go wrong with it and create an angular brick that cuts into your palm or go right and make a LEGO block that fits your palm perfectly. For example the Nokia X got the proportions right, but that’s a small phone…

Sony makes angular phones, but they have a reputation of digging into your palm after long phone chats. I see that they got the message, since the Xperia Z3 has been leaked and it appears to have rounded edges, that won’t hurt your hands anymore. Anyway, if we ever get a Nexus phone, it will probably have a rounded bottom and top as usual, a 64 bit CPU and something to stand out: either a crazy good camera or 4 GB of RAM.

About Kelvin
Passionate about design, especially smartphones, gadgets and tablets. Blogging on this site since 2008 and discovering prototypes and trends before bigshot companies sometimes
Gold iPhone 6 is Pure Eye Candy   Borderless iPhone 6 Render Feels Like the Perfect… iPod