Ben Ling is back with yet another concept phone, the Sony Xperia Quad handset, that you can see below. Dangerously close to the definition of a phablet, this 5 incher feature a Full HD TFT shatter proof screen and a scratch resistant body. The screen supports a 1080p resolution and at the back of the device we find a 14 megapixel camera with LED flash. 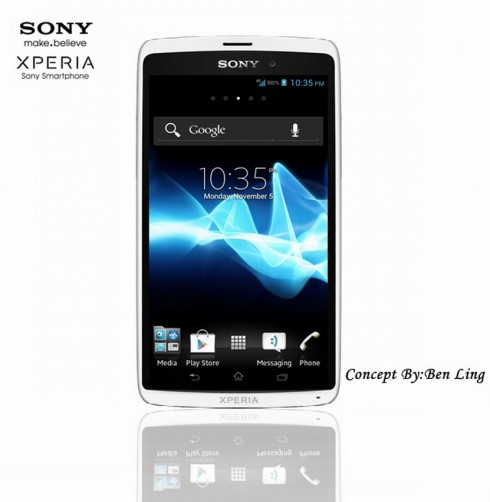 There’s an Exmor RS sensor in here, as well as Sony White Magic technology and support for 16x digital zoom. The camera does 1080p video recording and the front 2 megapixel camera is capable of Full HD capture as well. The specs list of the smartphone involves a quad core Exynos 4412 processor, although strangely the list also mentions a Krait CPU with quad core 1.7 GHz frequency, so maybe there are two versions. The handset measures 9.2 mm in thickness, weighs 129 grams, so it’s 17 grams heavier than the iPhone 5.

It also has 2 GB of RAM, LTE, Android 4.1.1 Jelly Bean as the OS and the usual selection of Sony technologies, like Mobile Bravia Engine 3, xLOUD Experience and more. Finally, there’s a Li-Ion 2500 mAh battery on board and microSD is also here. As far as design goes, the handset is more screen less body, being totally focused on the screen area and less on various body modifications to appeal to the eyes. Frankly I find that transparent bar on some Xperia models useless and Sony may figure that out too soon…

About Thrystan
HTC Flyer 2 Tablet Concept Makes Subtle Improvements Over the First Model   Samsung Galaxy S4 is Here! Your Suggestions and Comments Were Turned into a Mockup by Bob Freking! (Video)