Hasan Kaymak from HTC Concepts imagined a new version of the HTC Flyer, the famous 7 inch tablet from last year, that brought styluses on Android into mainstream. As you can see, the main idea of the design is kept, but there are dotted areas at the top and bottom, leading me to believe that in fact they are very large speakers. 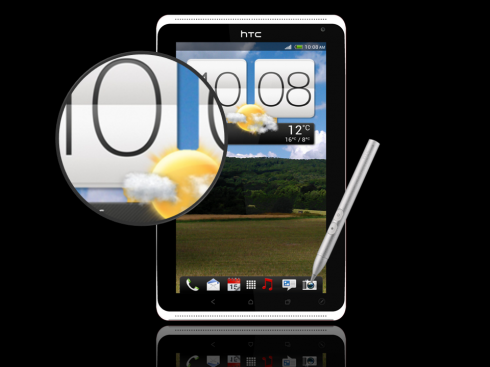 There’s also a a bulky Scribe pen here, one that looks very professional and apparently there’s also a special Mathematics app that would help students with homework. The new tablet is razor sharp and it come with a camera, probably a 5 or 8 megapixel sensor. Since the design didn’t mention any specs, allow me to speculate some for you. I imagine that a quad core Snapdragon S4 processor would fit the tablet just fine and the 7 inch diagonal is kept, this time maybe with a resolution that’s past 1280 x 800 pixels, maybe something in the range of Full HD or 1200p even?

Anyway I also expect 2 GB of RAM on this device, 32 GB of storage, no microSD card slot (for some reason), LTE and… a surprise! Imagine if HTC pulled out a special gaming dock for this tablet, allowing you to place the slate inside it and have a ball with Xbox-like controls. Wouldn’t that kill every other tablet gaming-wise? Just think about it… and also about OnLive and the fact that HTC has PlayStation certification! Dreamy right?