Sony Xperia T1 Concept Follows in the Footsteps of Z1

After the Xperia Z1, a new road for naming patterns of Sony Xperia handsets has been opened and Ben Ling is quick to follow it with a fresh concept. Meet the Sony Xperia T1, pictured below and adopting the pretty much standard Sony design. 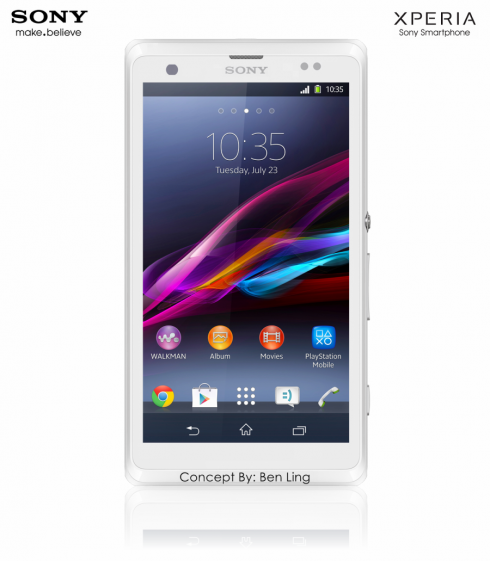 We’re dealing with a 4.7 inch handset with a 16 megapixel FHD camera with Sony G Lens and a 1/2.8 inch Exmor RS sensor. The screen uses X Reality technology and Dragontrail glass, plus it supports multitouch for up to 10 fingers and offers a 469 ppi pixel density, way more than the human eye can see.

Apparently there’s a new type of flash available, a CRI LED, whatever that is. Specs include BIONZ for mobile technology, a quad core Snapdragon 800 CPU, 16 GB of storage, a microSD card slot and a 3100 mAh battery. We also get Android 4.3.1 and PlayStation certification, as well as NFC, HD voice and a case that measures 8.7 mm in thickness.

The Sony Xperia T1 concept weighs 155 grams and it has a removable battery, in case you’re wondering. 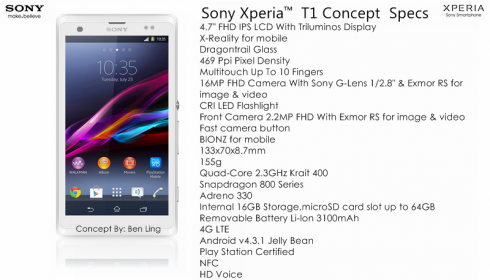 About Kelvin
Passionate about design, especially smartphones, gadgets and tablets. Blogging on this site since 2008 and discovering prototypes and trends before bigshot companies sometimes
Android 4.4 Google Play Games Render Looks Convincing   Sony Xperia Edge is a 5 Inch Smartphone With Android 4.4, Too Much RAM