Everyone is talking about the Sony Xperia Z1s aka Xperia Z1 Mini aka Z1 f, but up until now we haven’t seen any trace of a real announcement coming soon. This device gets rendered today courtesy of Ben Ling. 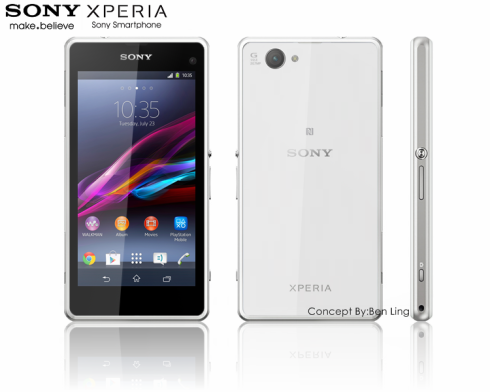 As you can see, this model adopts the Sony Xperia Z1 design, with big edges, metallic Power button, corner placed camera and camera physical button. This model is supposed to have a 2300 mAh battery, a 4.3 inch display with 720p resolution and an impressive Snapdragon 800 CPU, which is a bit overkill for such a small handset.

There’s 2 GB of RAM inside, 16 GB of storage, a microSD card slot, plus a 20.7 megapixel camera at the back and a front 2.2 MP shooter. We’ve got Android 4.2 as the OS, NFC and probably LTE, although I wouldn’t bet on that. Seeing those specs, I would say that this Mini is stronger than any other Mini model out there, much stronger

About Kelvin
Passionate about design, especially smartphones, gadgets and tablets. Blogging on this site since 2008 and discovering prototypes and trends before bigshot companies sometimes
Samsung Galaxy S5 Renders Feature a Flex Version and a Normal One   Nokia Lumia 101 Smartwatch is a Nice Little, Elegant Bracelet