If you’re not happy with the Sony Xperia Z and I know I’m not, how about a superior version called the Xperia ZS? The device is designed by Deepak Ahuja and it enters the phablet realm with a 5.3 inch screen, that’s shatter proof and scratch resistant. 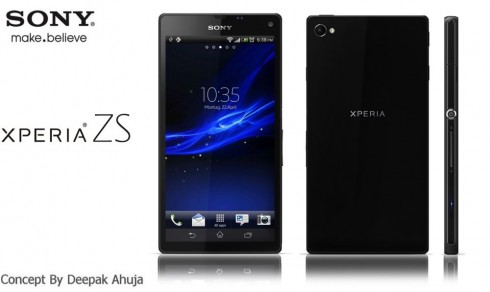 Also, notice that the glassy and glossy aspect of the Xperia Z is gone, being replaced by a matte case, hopefully something like the case of the BlackBerry Z10. The Sony Xperia ZS concept runs Android 4.2.1 Jelly Bean and it supports a 1920 x 1080 pixel resolution. It relies on a quad core 1.9 GHz Krait CPU, which is a bit underwhelming for me. Maybe a Snapdragon 600 would be nice…

Other specs include a 13 megapixel camera at the back with LED flash (why not dual LED or even Xenon?), a 2.1 megapixel front camera with BSI and 16/32/64 GB of storage. There’s also 2 GB of RAM and a 2700 mAh battery. As you can see, the upgrades from the Xperia Z are not that great and only the display stands out. Fingers crossed for getting rid of the godawful TFT and replace it with either Super AMOLED or S LCD 3.