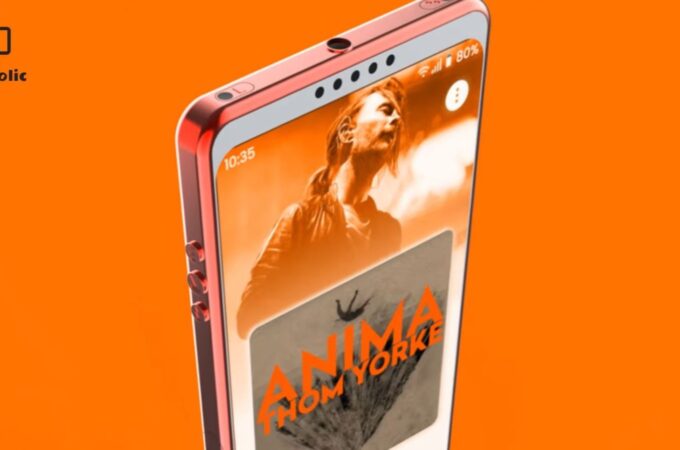 We started off in 2008 as a concept phone website, focused a lot on Nokia and Sony Ericsson phone designs, but things have changed a lot. It was all HTC for a while, Samsung Galaxy and iPhone by the dozens of concepts and now nostalgia sets in. We find ourselves craving for a decent Motorola or Sony phone. The craving is satisfied today thanks to the Sony W2021, a 5G Walkman phone, the W800 resurrection.

The creation of GSMaholic, the device is shown in detail in the video below. Judging by the repetition of the Thom Yorke imagery, the designer could be a Radiohead fan, which I actually dig, being a fan of the band. Walkman phones used to be a big deal about 12 years ago, but that segment died out. Motorola, Sony Ericssson and Nokia all made music phones and put a lot of emphasis on the internal storage, speakers, codecs and headphones. Some of the bundled headphones back then even hold up today.

Anyway, the new and improved 5G Walkman phone, the W2021 comes with a new camera array, a quad back shooter with a triangular display. There’s also a very complex equalizer with lots of channels, powerful stereo speakers with lots of bass and haptic feedback. We could also like some sort of cheaper Sony WF-1000XM4 headphones bundled, spatial audio, 360 acoustics and obviously a very high volume. Not very sure about those protruding side buttons, that feel like bulging iPhone 5-style buttons.

I love the metal frame though.

About Kelvin
Passionate about design, especially smartphones, gadgets and tablets. Blogging on this site since 2008 and discovering prototypes and trends before bigshot companies sometimes
Honor 50 Leaked in Multiple Renders, Specs   SMS Gateway API: How Does It Work?